Caden is an Open Data Platform which allows users to claim and share their personal data at their discretion — and get paid for it daily. In case you’re wondering how data sharing works currently, consider this your warning that it’s not pretty.

As you wander the Internet, companies follow your every move and create a profile about you. While this is no surprise to most Internet users, you may not realize that entities collect and sell this personal data without your knowledge or consent — and they make big money. (One conservative estimate valued the personal data industry at $200 billion in the US alone.)

Caden’s app arms Internet users with an important tool to take back some of that power (and money). Users connect various accounts (Gmail, Netflix, Spotify, HealthKit, and more) to Caden to store their personal data in their own secure data vault. Eventually, users will have the option to share their vault with brands — for a price. But until then, Caden pays users monthly just for keeping those accounts connected.

Caden came to Deviate Labs to acquire app users. Prior to the app’s launch, this meant accruing a list of beta signups who would later be tapped to download the app.

One parlor trick Caden would wield when meeting with prospective team members and investors was a simple data broker API (screenshot below) that would reveal extensive — and creepily accurate — information about the brave volunteer by simply inputting their email address.

Data ranged from previous addresses and work history to birthdates, professional skills, and more. The demo was bare-bones but consistently led to the “Huzzah!” moment where boring data privacy tech was immediately made personal. As we described the invasive nature of data brokers, then showed the demo, users inevitably uttered something along the lines of “that’s creepy.” We realized we needed to make more people aware of the problem while Caden got to work fixing it. So, Deviate Labs decided to take this demo and make a digitally immersive version to attract top-of-funnel interest and generate that same “Huzzah!” moment for prospective app users.

While the demo worked like a charm in person, the anonymity of the Internet made the stunt more challenging — there was no trust for Caden in the digital version. We needed users to feel comfortable enough to enter their email address, only to then creep them out by revealing their personal information.

Furthermore, Caden was notifying users that their data was being bought and sold in a less-than-consensual manner, but they needed to avoid being the proverbially shot messenger. So, the demo would need to expose the shadiness of data brokers without tarnishing the trustworthiness of Caden’s brand. Basically, we would need to strike the perfect balance between “creepy enough to demonstrate the problem” and “not creepy enough to turn people off from Caden altogether.”

Lastly, the budget for the pre-launch phase was minimal. The experience would need to be created using limited, in-house resources, and our targeted cost per Beta signup was under $1.

One early idea was Zoltar — the all-knowing animatronic fortune-teller from the 1980s Tom Hanks classic Big. 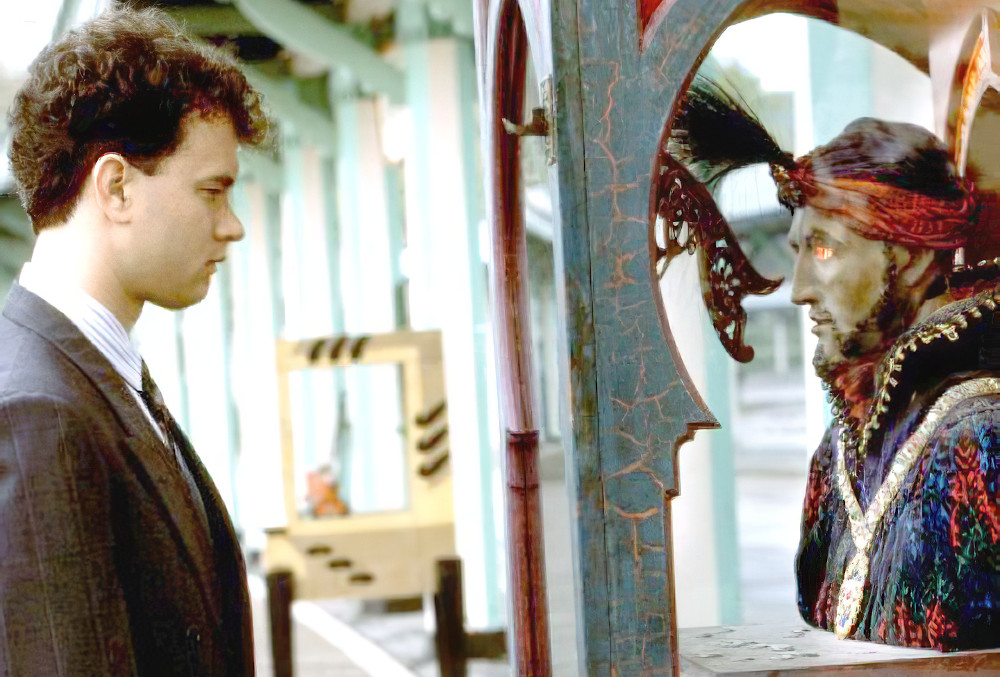 Many of our Gen-Z team responded with “Zol-what,” but the endearing Tom Hanks clip left a positive feeling of 80s nostalgia. As we peeled back the layers of feasibility, we came across Zoltar.org, the Zoltar rights holder. Given the team’s mixed feedback, we decided against this route since we hit the Zoltar licensing roadblock.

Leaning into the movie nostalgia, we creatively explored a “Mirror, Mirror on the Wall” angle, paying homage to Snow White and the many movie reincarnations of the mirror-mirror mantra. 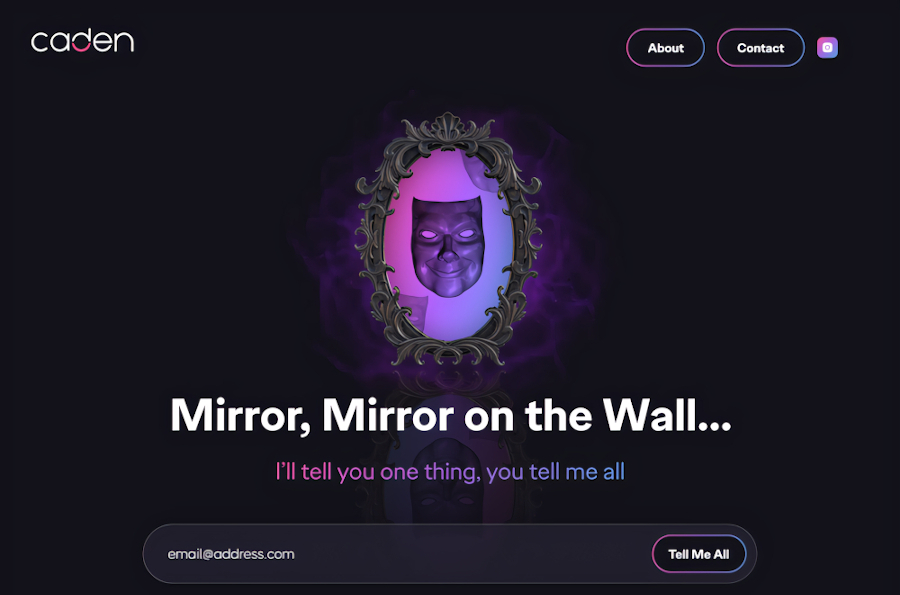 Internally, it didn’t carry as much momentum relative to the other creative explorations. We even contemplated replacing the theatrical mask with a Zuckerberg-inspired caricature, but it conveyed a slightly wrong message: the intention was to highlight the data broker industry, not Facebook.

Another creative alternative was an Omniscient Orb, which was perceived as too nebulous — perhaps because it literally looked like a nebula. 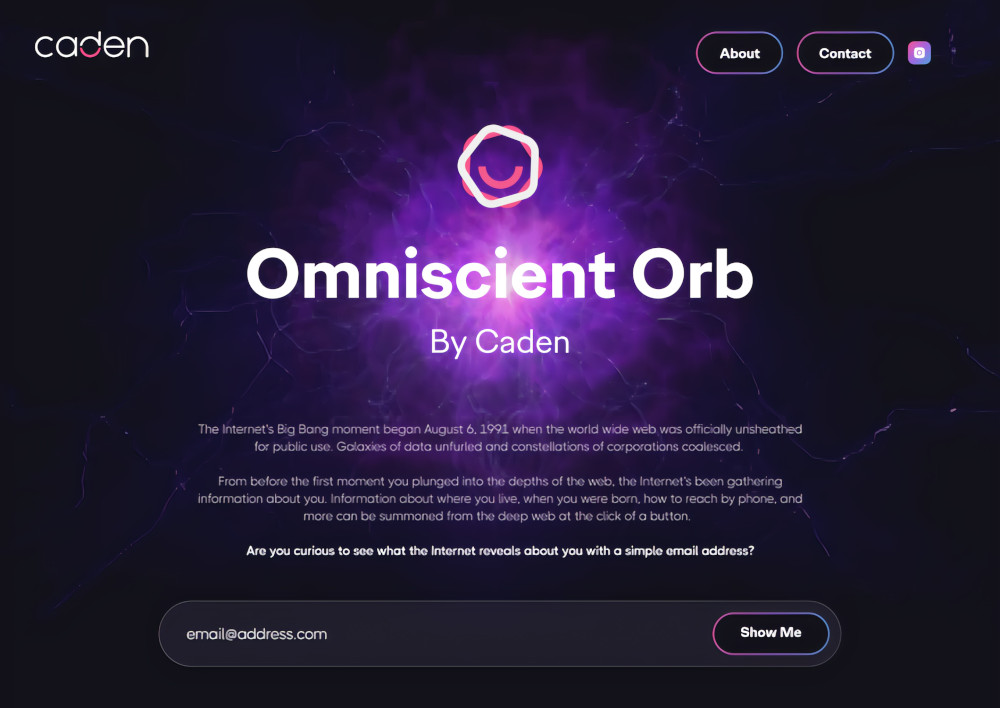 The creative option that initially received the highest mark collectively was the Caden Magic 8 Ball: 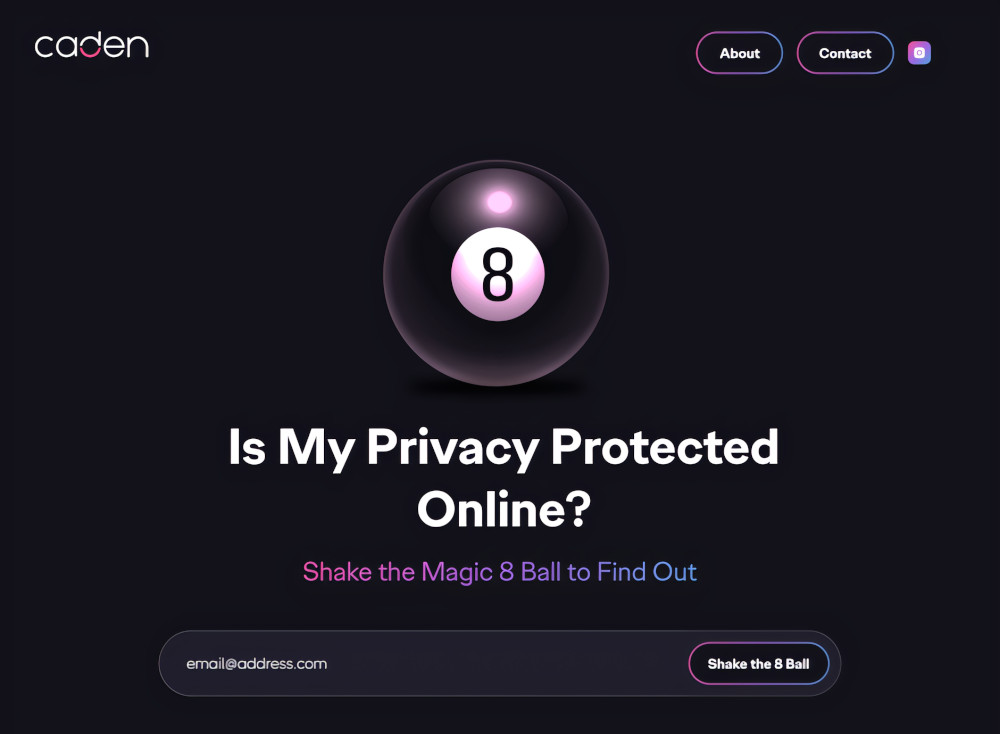 The Magic 8 ball provided a form factor that worked well on small mobile screens, where we anticipated most of our traffic. Plus, it had universal recognition and presented a nice analog for digital experiences (“Shake the 8 Ball” for opt-ins, “Pass the 8 Ball” for shares, etc.).

We mocked up a sample user journey and even started development, but then John Oliver changed everything.

On April 10, 2022, amid our 8 Ball mockups, HBO released an episode of Last Week Tonight with John Oliver entitled “Data Brokers.” John Oliver blasted data brokers’ shady practices and pulled an ads stunt that — as he points out — isn’t technically blackmail, but feels an awful lot like it. 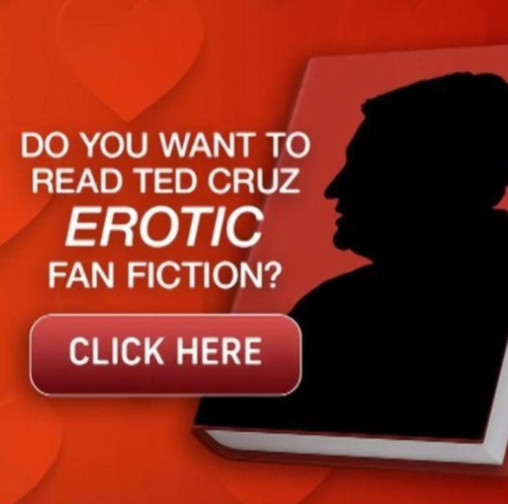 The episode was a turning point for the data demonstration project because it introduced a large group of people to the problem with data brokers — and it did so in a simple, entertaining way. In other words, it was now safe to assume that a portion of the demonstration participants would already be familiar with the data broker problem.

Empowered by John Oliver’s creepy call-out, we decided to pivot our product and turn up the creep factor a couple of notches.

As we moth-balled the Magic 8 Ball in Caden’s product attic, we re-imagined a CIA terminal that the team previously discarded.

Caden distilled down the creative direction to “less Bourne, more Chernobyl” — boot the 2000-era CIA dashboard from the movie Bourne Identity, and double-down on a 1980s-era terminal experience like HBO’s show, Chernobyl.

Knowing that we were up against the sharp media half-life, we worked tirelessly to craft an experience that incorporated multiple data sources encapsulated in a narrative that accounted for data variability and smoothed out potential drop-off points. We worked so tirelessly that our glitchy interface victimized us — we had to add photosensitive palette cleansing breaks to avert (flash warning!) “Pokemon Shock.” 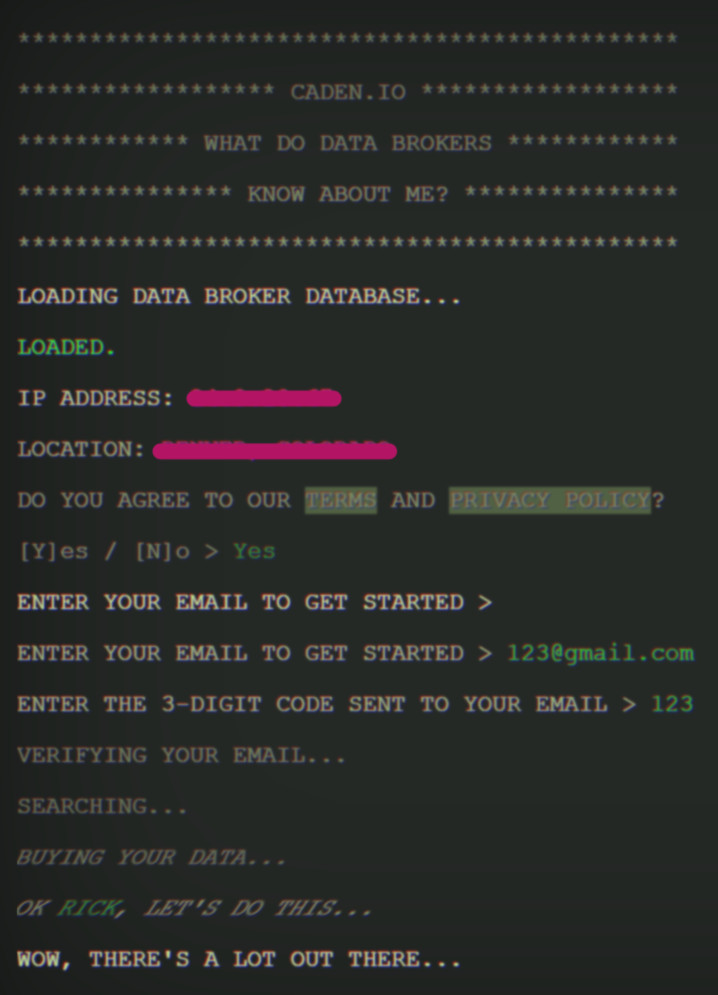 Before we had even agreed upon a launch strategy, we quietly shared the Terminal with our friends, family, and financiers for feedback. Within minutes, people were messaging us with “Holy crap!!” and we had hundreds of people signing up within hours. Within days, Caden’s beta list grew into the thousands. 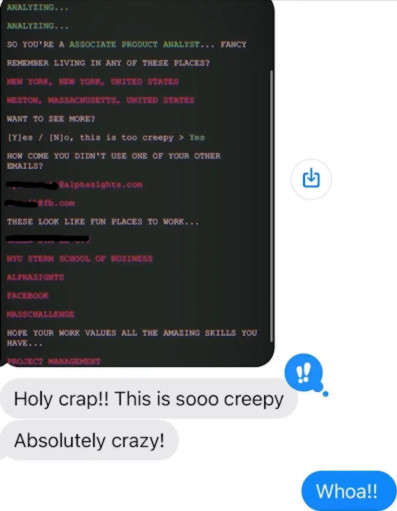 Note: While the original Terminal is closed, you can access a demo version. Enter any info to see how it works!

While the initial reaction was positive, we knew a huge driver to the terminal was trust — we couldn’t expect strangers online to readily enter their email the way family and friends would.

So, we decided to work with an influencer who would function as an ambassador for Caden with their followers and allay any fears about sharing their personal info. We knew we needed someone who was brand-aligned (or even brand-adjacent) and also had a large follower-base to hit our beta goal as quickly as possible. Budget was also of concern, so we filtered for lower-cost placements.

Eventually, we connected with a TikTok account that created videos on unexpected and hidden details in Google Maps - and the account checked all of Caden’s boxes. The resulting collaborative post went viral (even though it was flagged and had to be re-posted), and within weeks, Caden had met their beta signup goal. 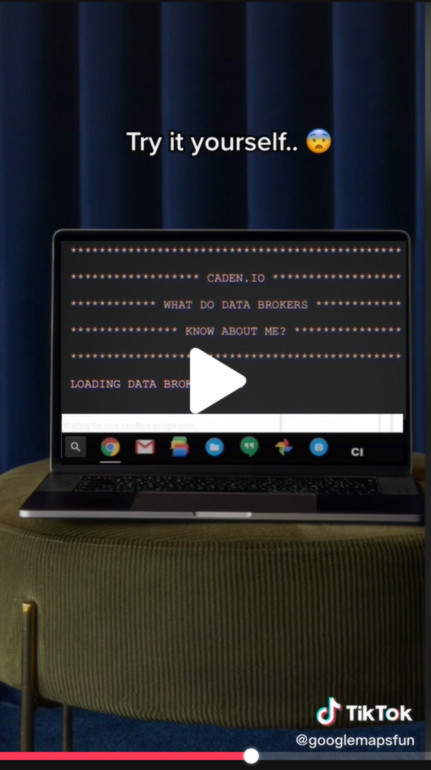 To supplement the TikTok engagement on other platforms, we launched a series of ads focused on various campaign themes. For example, the Terminal officially launched on Friday the 13th, so we created ads on that theme, even referencing a creepy Zac Efron movie — Liar, Liar — with the same release date.

We also referenced the Last Week Tonight prank by snarkily recreating John Oliver’s ads for fans of the show. 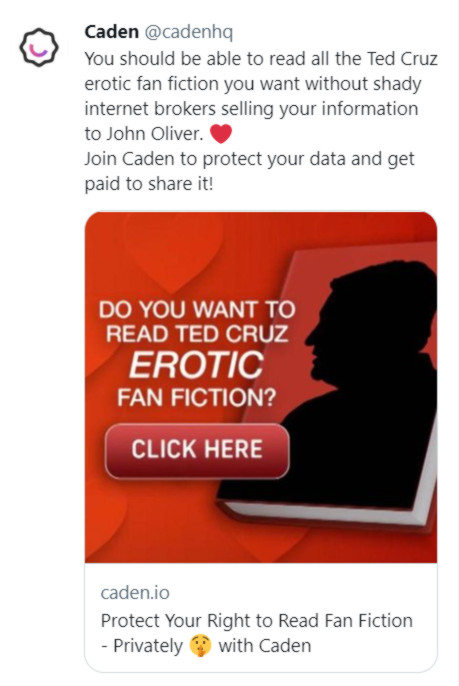 Lastly, we worked with a video editor to create a shock-filled ‘reaction’ video created with stock footage to punctuate the aghast reactions we often encountered during our data broker demos. 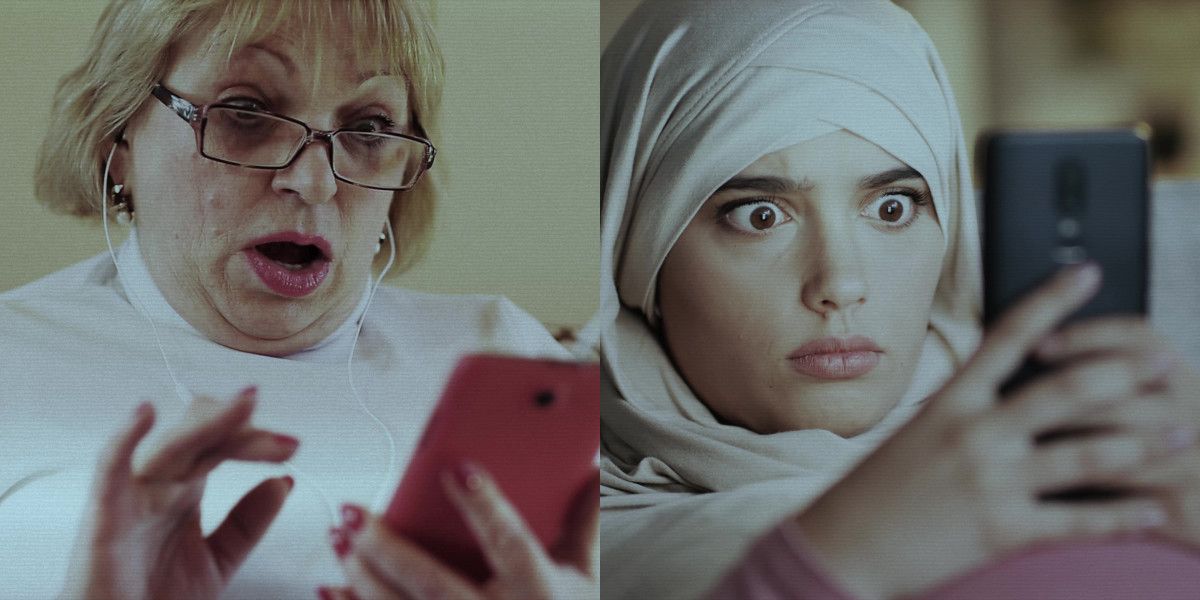 Caden, a privacy tech company, was just coming out of stealth and wanted to generate 10,000 Beta signups in advance of launching their app on a “shoestring” budget.

The objective was to create an engaging micro-app that would virally spread awareness of the many problems with personal data control and protection online, and position Caden as a solution to the data privacy problems.

The biggest challenge was to avoid a “shoot the messenger” scenario where users would ascribe a negative sentiment towards Caden.

The other challenge was to acquire 10,000 signups with effectively no paid advertising budget.

We achieved the signup goal with only $350 of spend by creating an 80s inspired data terminal where users could enter their email to reveal the personal information about them that was currently being bought and sold online. A niche, brand-aligned influencer was the spark that set the virality fire ablaze.

Contact Us
More Articles
Growth Hacking Recommended Tools
These tools will help you assemble your Automated Sales Process.
Turn Your Business Into a Growth Engine Through Referrals & Retention
Growth marketers and growth hackers know that referrals and customer retention offer tremendous...
Top 11 of the Best Growth Marketing Agencies in the US
Modern “growth marketers” are a marriage of clever “growth hacks” coupled with the methodical...
Subliminal Messaging Meets Escape Rooms on Black Friday for Virality
How do you advertise to and get the attention of a crowd notorious for using ad blockers, anti-track...