How do you advertise to and get the attention of a crowd notorious for using ad blockers, anti-trackers, private incognito browsers, and VPNs all geared at ensuring your ads don’t reach them? This was the dilemma our client, Radix, the owner of .TECH domains, wanted us to help them solve.

The campaign aim was to ignite exponential .TECH exposure and build affinity with an audience allergic to all things advertising. We had to think outside the traditional box of advertising.

Eyes on the Prize 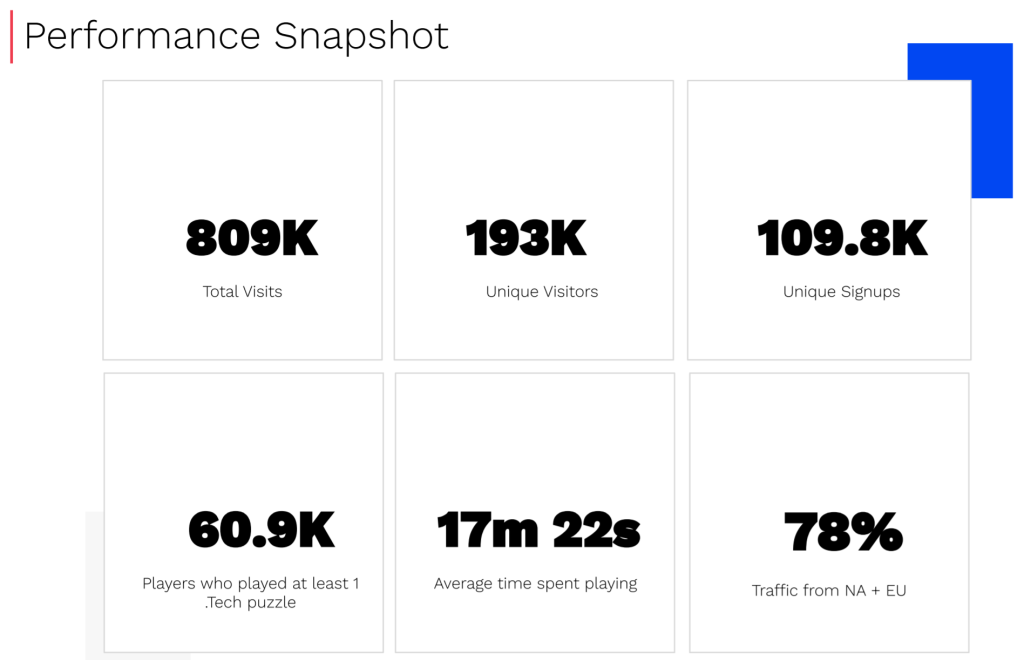 There were several KPIs we were keen to optimize for:

And of course, the lightning-in-a-bottle KPI: virality (measured by how many new users were introduced by existing users).

During the growth hacking ideation phase, we explored a wide spectrum of ideas including creating branded premium domains for brands with tech in their name (like Caltech, Logitech, etc.), partnering with CES (an existing .tech customer), utilizing college job boards for virality, coworking space collaborations, and other PR stunts.

The growth hack we felt had the greatest potential was a digital scavenger hunt. Through an intensive iteration with our clients, this developed into what we colloquially called the Anti-Black-Friday Black Friday Escape Room.

Due to lockdowns and quarantines in 2020, we anticipated that Black Friday store closures would eradicate the in-real-life fun out of Black Friday with all sales (and ad dollars) going to promote Cyber Monday. After months of COVID-19 related bad news, we committed ourselves to creating some good news by giving away free tech products when every other company in the world was trying to sell something. To punctuate the Anti-Black-Friday mantra, we stayed away from the trappings of a typical give-us-your-email online giveaway, and instead created several for-techies-only online “escape rooms.”

Players were prompted to solve puzzles of various types – trivia, riddles, ciphers, logic, coding, etc. – in order to “escape” a room and become eligible to win a prize. The rooms were themed around different tech industries such as biotech, cryptology, front-end development, among others to connect to a wide range of tech audiences.

There were 6 rooms in total and we made them sequentially available to our audience over the duration of the campaign. The delay in opening up the rooms cultivated buzz, excitement, and anticipation, and also gave our audience the time they needed to collaborate online and solve the puzzles. 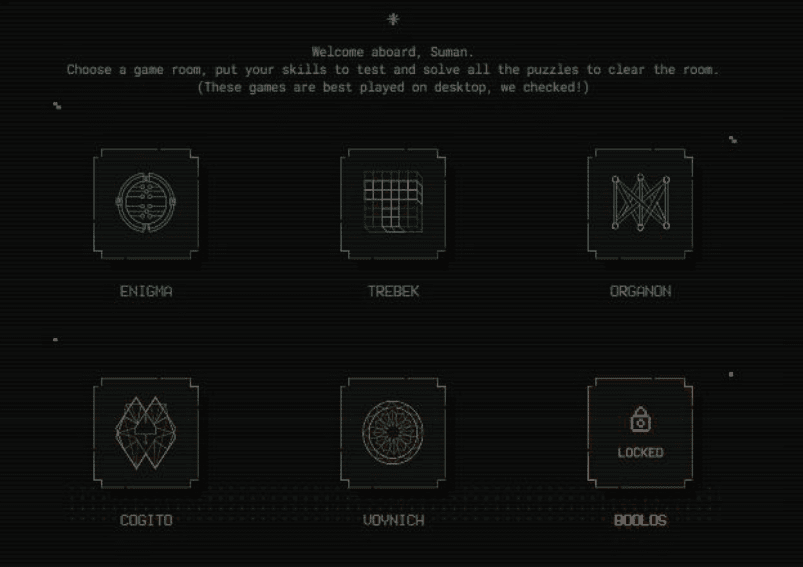 Keeping in mind our primary goal – building more brand awareness for .TECH domains – we carefully integrated clever .TECH domains (such as you-cant-c-me.TECH and thisisntevenmyfinalform.TECH) into various puzzles. Players would visit various .TECH domains to obtain additional clues required to solve the puzzles. By making the players work to arrive at the .TECH domains and then type them into their browser (we did not allow copy and paste) helped increase familiarity and memory recall for .TECH. However, we were careful not to compromise the player experience by overdoing the .TECH branded moments.

Balancing authenticity with brand goals requires artful campaign design. The online chatter demonstrated that we were able to achieve the right balance: 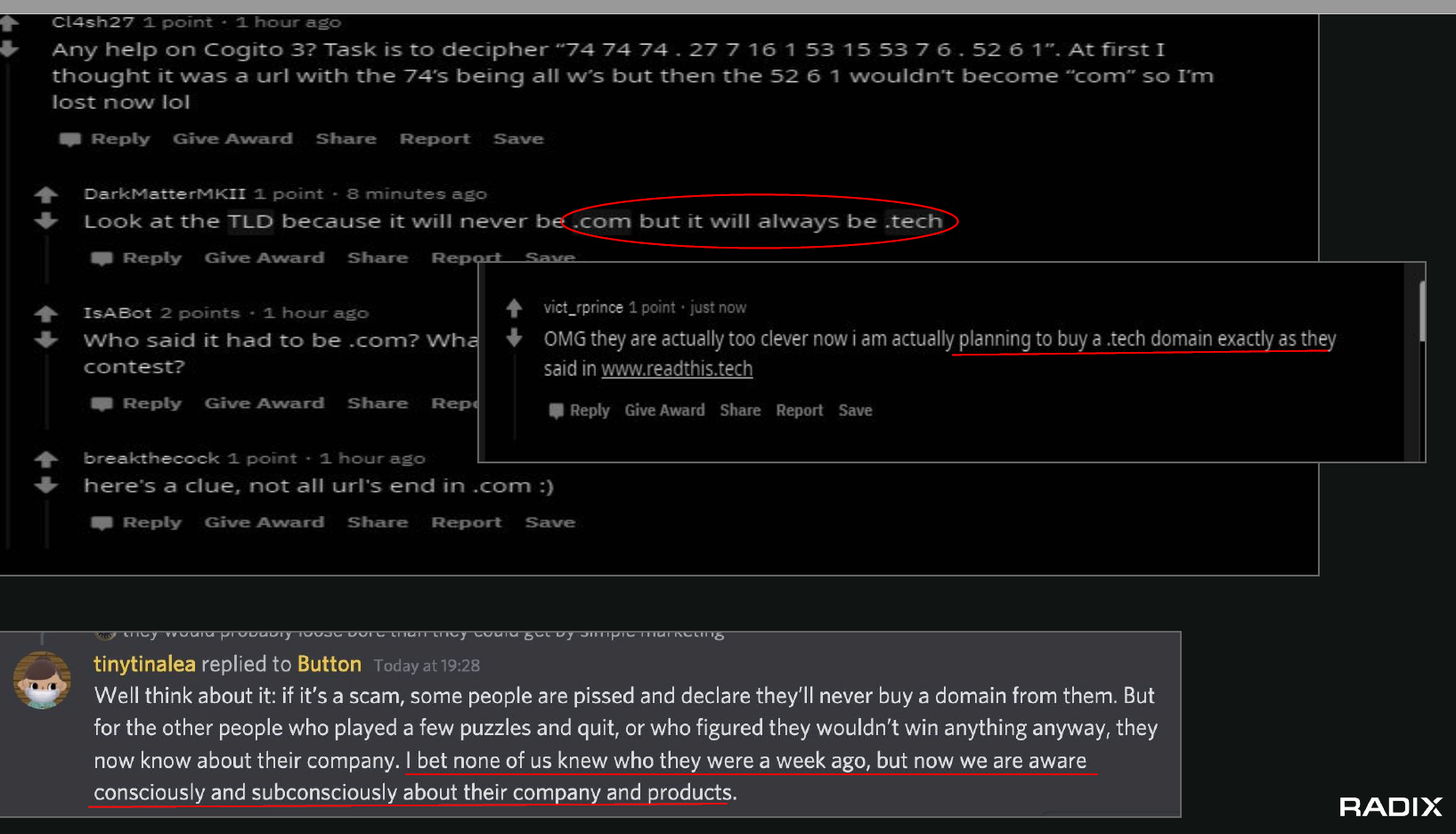 To further amplify brand awareness, we encouraged repeated engagement by adding continuity between the puzzles and rooms. Puzzles built off the solutions to preceding puzzles as we crafted narratives around each of the rooms. Prize eligibility was premised on completing all prior rooms, so participants were plagued by a sense of “incompleteness” without finishing all of the puzzles in all of the rooms and this compelled them to proceed with their prize-winning puzzle-solving efforts. The interlocking game architecture we devised resulted in an average time on site of over 17 minutes!

While the puzzle solving required intense concentration, and at times dusting off computer science material people thought they would never use after college, we injected comedic relief along the way. The relief came in the form of easter eggs, call outs to pop culture and tech heroes, well-recognized memes, and nostalgic throw-backs (as a matter of fact, this entire growth hack was coded using an 8-bit design language and color palette as an ode to old-school computer gaming). The fan-favorite was when we Rick-Rolled our audience in one of our puzzles.

Going “viral” is what everyone dreams of – after all, who doesn’t like free, exponential exposure?

However, we are keenly aware how challenging it can be, especially when you consider how leery our target audience tends to be of sharing on social media platforms. While we were realistic in setting expectations and prepared for the scenario where our viral coefficient stayed well below 1 (meaning, there was little organic sharing), we embedded several mechanisms to encourage as much social sharing as possible.

For starters, it’s no accident that we structured this campaign as a series of escape rooms. As anybody who has ever enjoyed an escape room in person can attest, it’s much more fun solving the puzzles with a group of friends than going at it alone. Contrast this with say… a collegiate exam environment, where solutions are intended to be derived independently.

With every puzzle, we provided helpful hints that could only be unlocked by the user sharing the puzzle on social media platforms (we provided one hint per share). Reddit emerged as a core driver of virality which is consistent with the social behavior of the tech target audience. Another emergent behavior was a Discord server that participants setup to collaboratively solve puzzles (and brag when they derived a solution).

Our marketing push was multi-pronged. To seed the initial effort, we had several marquee influencers lined up with a total reach of ~26 million. This was coupled with strategic ad buys along with renting relevant lists such as those related to gaming for the sake of sending out newsletters. Retargeting pixels triggered programmatic ads on Facebook, Twitter, and Google whenever a new puzzle was released.

After users created an account and joined the adventure, we had emails announcing when new rooms /puzzles are released, providing words of encouragement for participants to re-engage when stuck, and of course giving players props for their accomplishments. We fostered a challenging, fun, and feel-good atmosphere for our audience of over 100,000 participants.

We set out to help put .TECH on the map and we did just that. Over the short lifetime of the campaign (~3 weeks), we had 809,000+ visitors, of which 193,000+ were unique, with an average time spent on site of 17 minutes and 22 seconds, reached over 205k social media accounts, and acquired 110,427 email opt-ins. Organic search queries related to “.TECH” increased over the span of the 3 weeks by roughly 180%. Dedicated Reddit and Discord communities and special subreddits were created. Overall audience sentiment was overwhelmingly positive and it was obvious that some spent a significant amount of time partaking in our campaign.

Some even went so far as to create videos, blogs, and live-streams dedicated to the BreakTheCode.TECH campaign. 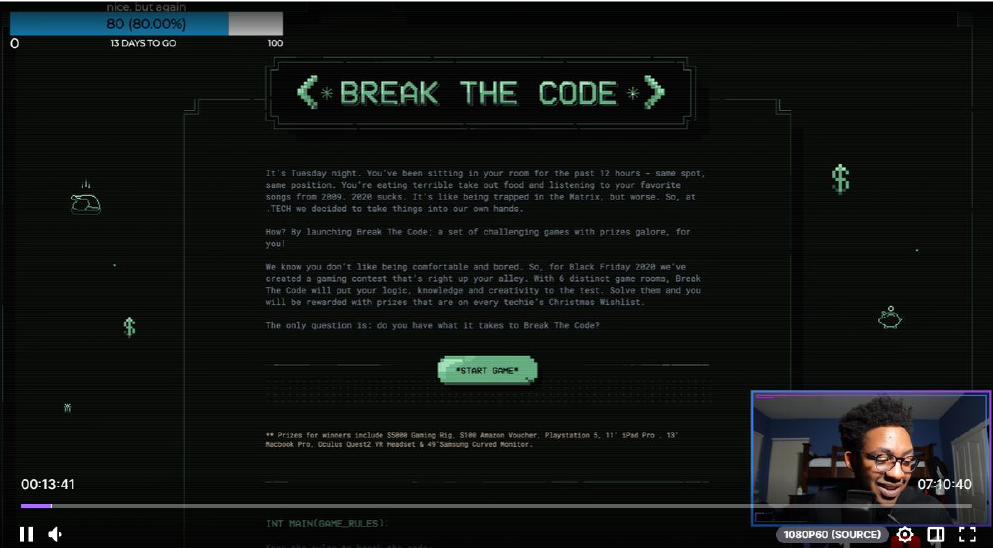 But perhaps what we are the most proud of is the fact that we changed lives, literally. 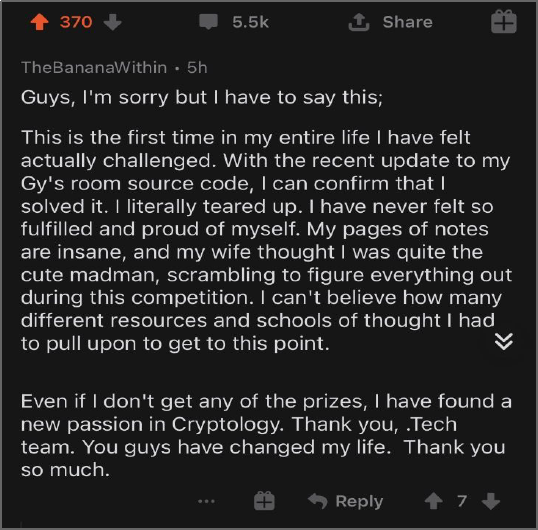 Radix, the parent company of .TECH which owns several other top-level domains like .STORE, .SPACE, and .SITE, dubbed BreakTheCode.Tech the most successful marketing campaign in the history of their company. The Radix team worked tirelessly to execute many aspects of the campaign and BreakTheCode.Tech couldn’t have been a success without their involvement.

BreakTheCode.Tech embodies many of the attributes that make Deviate Labs one of the world’s top growth marketing agency. A creative core idea, out-of-the-box mechanisms for virality, harmonization between the audience and the acquisition channel, and a commitment to transform a creative concept into a reality. As a capstone to our efforts, BreakTheCode.Tech went on to earn a coveted Webby nomination for Best Growth Strategy! 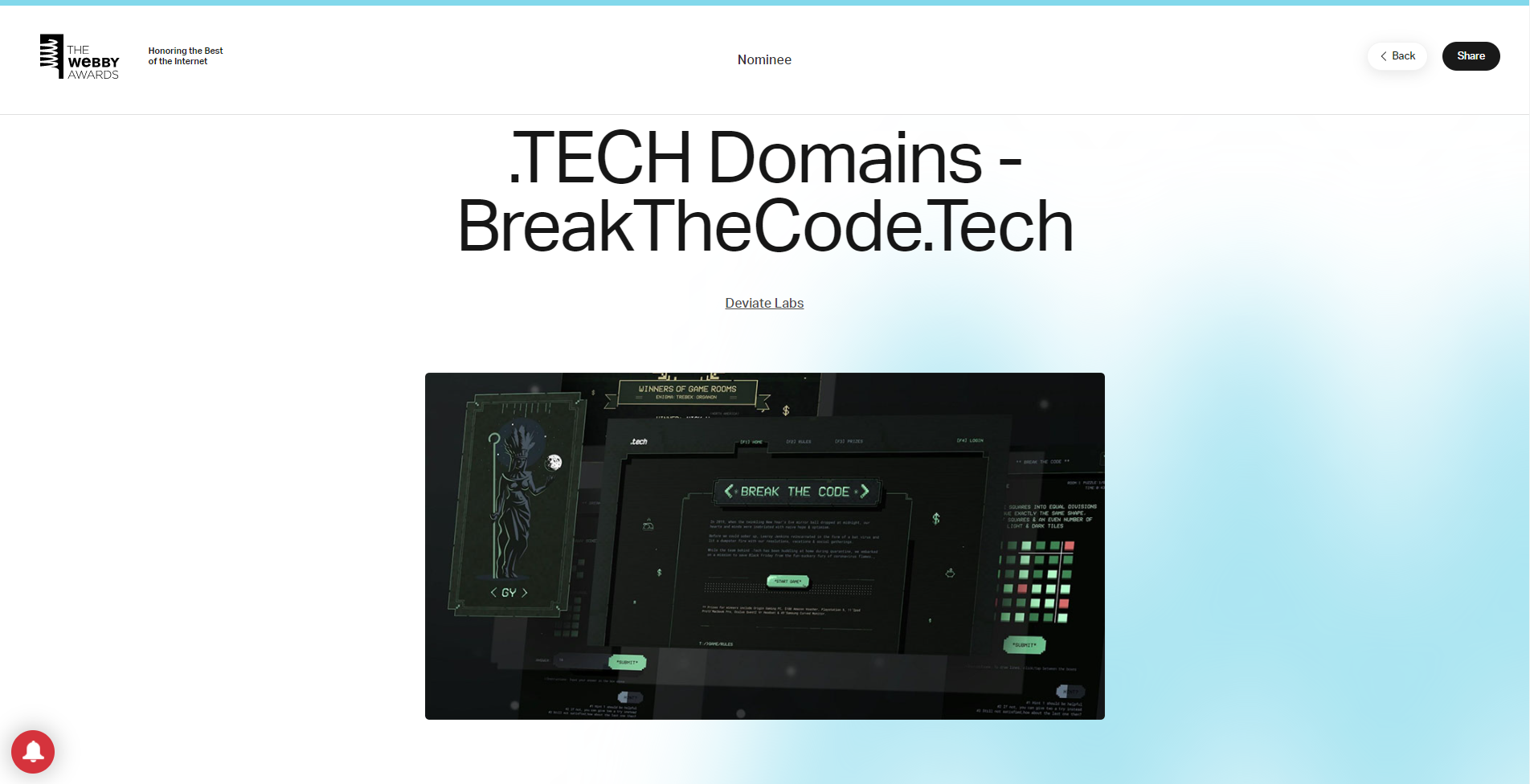 Contact Us
More Articles
Growth Hacking Recommended Tools
These tools will help you assemble your Automated Sales Process.
Turn Your Business Into a Growth Engine Through Referrals & Retention
Growth marketers and growth hackers know that referrals and customer retention offer tremendous...
Top 11 of the Best Growth Marketing Agencies in the US
Modern “growth marketers” are a marriage of clever “growth hacks” coupled with the methodical...
Using Sales Technology to Skyrocket Your Growth
It’s the 21st century – no business should be spending time on tasks like tracking leads or...